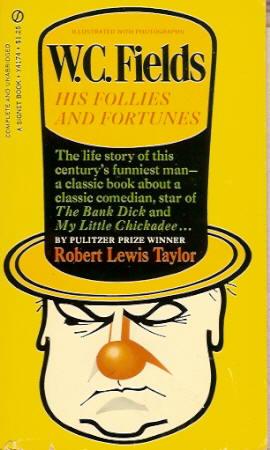 The other day my wife and I had to take a friend to the ER. While she went back with her, I headed off to the nearby Half-Price Books to wait for her call to come pick them up. I ran across this book, Robert Lewis Taylor's somewhat controversial original biography of W.C. Fields, in the CHILDREN'S section! The great man would no doubt have been thrilled.

I first discovered Fields in THE FATAL GLASS OF BEER, one of the great old films shown at Covington's Liberty Theater as it was closing in 1970. The Fields revival (of which this 1967 printing of the 1949 book was a part) was just getting under way. Over the following decade, I was able to see most of his best movies as well as hear many of his radio appearances with Edgar Bergen and Charlie McCarthy. I even got his own book, W.C. FIELDS FOR PRESIDENT!

Although I never became a major Fields buff, it's hard to sit through THE BANK DICK or NEVER GIVE A SUCKER AN EVEN BREAK without feeling as though you're watching a genius at work in some of the funniest films ever!
Posted by Booksteve at 12:58 PM