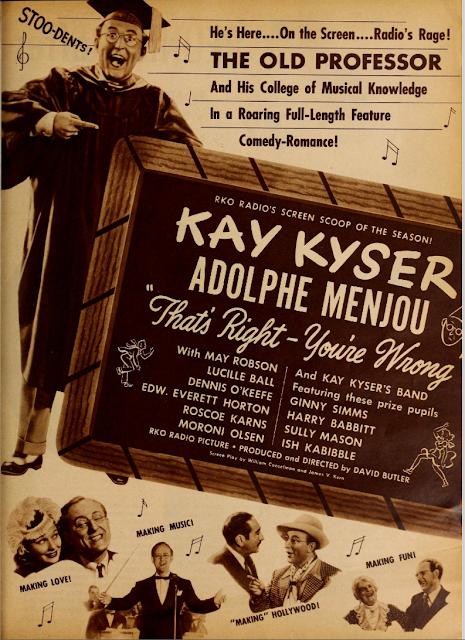 In 1980 I was just discovering swing music via a local Cincinnati radio series that aired on Saturday afternoons entitled WHEN SWING WAS KING. Also in 1980 I was in a comedy troupe. We did one live appearance on Fountain Square where we met local TV comedy legend Bob Shreve. Bob invited our group to appear on an episode of his weekly all-night movie show, THE PAST PRIME PLAYHOUSE. Normally that show was done live with Bob ad-libbing schtick between overnight movie segments, all the while becoming tipsier by sampling the sponsor's beer. For this particular episode, though, Bob was going on vacation so we shot our segments several weeks in advance on a hot Thursday afternoon and then they were inserted into the movies when they finally ran.

The night it finally aired was the first time I had ever seen Kay Kyser whose music I had just begun to discover and I really liked his act! Been a big fan ever since and I tell people--quite accurately in its own way!--that I was in a movie with Kay Kyser once.

Posted by Booksteve at 7:28 AM