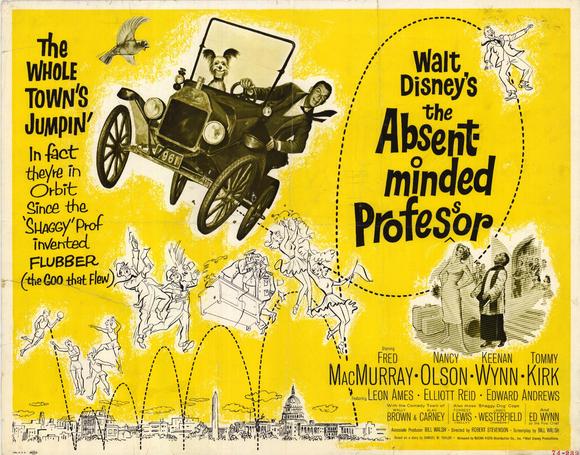 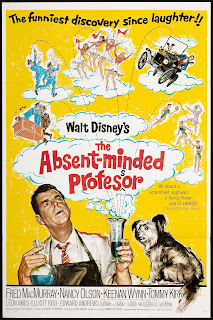 I was just over two years old when THE ABSENT-MINDED PROFESSOR hit theaters in early 1961 but it made a big enough impression on me that I still remember it to this day. If it was NOT the very first movie my parents ever took me to--at Covington, KY's Liberty Theatre, it was most definitely the first one I can recall.

The fact that it was a family-friendly Disney film was perhaps a happy accident. My Dad had always been a big film fan and his favorite actor since 1944's DOUBLE INDEMNITY had been Fred MacMurray. This was the reason we never missed MY THREE SONS which had started on TV just a few months earlier and most likely the reason we had gone to see this particular movie.

101 DALMATIANS had debuted just a couple of months earlier and to the best of my recollection I didn't catch that one until a later re-release. Had they been choosing movies especially for me, that would have been a more logical choice. 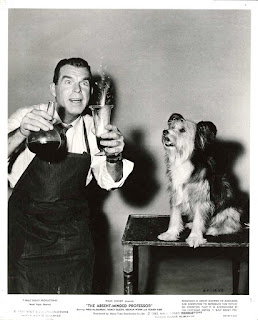 THE ABSENT-MINDED PROFESSOR was one of the first of many Disney live-action projects that essentially resembled an extended sitcom episode. THE SHAGGY DOG came first in 1959 with several of the same major players.

MacMurray plays the title role quite literally and endearingly as Professor Ned Brainard whose mind is on a hundred things every minute. The Professor has developed a new energy laden substance he calls "Flubber" for "flying rubber."The scenes of his old jalopy flying through the air under flubber power are the scenes hat had the most impact on me as a toddler. I can recall just staring at the screen in wonder watching the flying car! 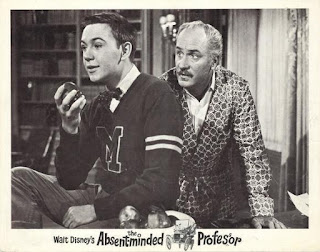 Along with MacMurray whom I would have already seen on TV, the film stars Tommy Kirk. Tommy I may have seen on reruns of THE MICKEY MOUSE CLUB on television but this was certainly my first exposure to him in a major role. In time he would become a favorite of mine before his fall from grace which led to his career effectively coming to a halt for decades.

I love character actors! Always have it seems! And this picture was the first place I saw many of the great character actors of the day as well--Edward Andrews, Keenan Wynn, Leon Ames, Elliot Reid, Forrest Lewis, Raymond Bailey and even old Ed Wynn, Keenan's pop! I had no idea of that at the time, of course, or why it was funny to have Wynn as a Fire Chief. Just a few years later, however, one of my favorite early records would be by Wynn, however. More about that at a later time.

My Mom and dad must have liked the show because when its unprecedented sequel, SON OF FLUBBER, hit theaters less than two years on in 1963, we were there!

The well-remembered Flubber films eventually led to theatrical re-releases and seventies TV showings. When home video came around and Disney reluctantly embraced it, they proved to be hits all over again. So much so that in the eighties the studio attempted a TV version starring Harry (NIGHT COURT) Anderson as the renamed inventor of Flubber. That didn't take after two pilots but a big-screen remake with Robin Williams in 1997 ended up doing quite well. 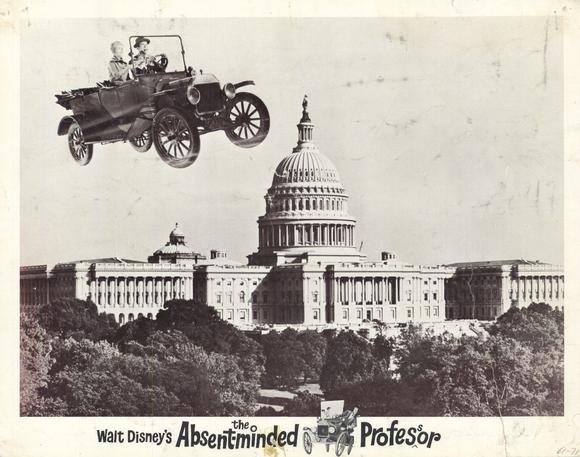 But when it comes right down to it, it wasn't the characters or the concepts that held my interest all these years. It's that singular memory of sitting in the darkness of the Liberty with my parents and a good-sized crowd of other people watching Professor Brainard fly that old car across the black and white sky--my first remembered exposure to movies--that has led to a lifetime of being a motion picture fan.