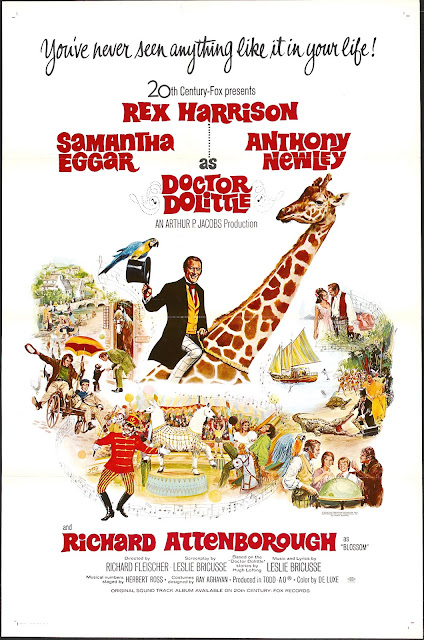 Toward the end of 1967, there was no escaping 20th Century Fox's DOCTOR DOLITTLE whether you'd seen the picture or not! Not only had the making of the film been fodder for tabloids and gossip columns for months and months prior to its release but the marketing and merchandising departments went into overdrive! To my almost 9 year old self, it seemed as though every bread, cereal, laundry detergent and toy company had a pushmi-pullyu or at least something with its picture on it. And "Talk to the Animals" was omnipresent! In fact there was SO much merchandise associated with the film that none of it made any money causing studios to shy off of ever going that far again. According to Wikipedia, this worked in favor of George Lucas a decade later when he was able to retain the lucrative merchandising rights to STAR WARS.

The infamous behind-the-scenes doings regarding the making of DOCTOR DOLITTLE are chronicled well in Mark Harris's book, PICTURES AT A REVOLUTION from 2008. What one sees ON-screen, however, isn't bad.

I went alone. I saw the film one Saturday afternoon in either late 1967 or early 1968 at the Liberty Theatre. I liked it! It was a tad slow and episodic but overall the endearing cast and hummable songs worked in its favor.

I immediately took to Anthony Newley as the Doctor's human sidekick. Rex Harrison had been in films and onstage for nearly three decades and was coasting high after the success of MY FAIR LADY...but I didn't know any of that. It would be years before I'd see MY FAIR LADY. I just knew he was charming and quirky and eccentric and I liked the fact that he could talk to animals.

Producer Arthur P. Jacobs was able to quickly put what was from his perspective a huge mess behind him as he went straight into PLANET OF THE APES. While both male stars never lacked work, neither were ever again given the major screen roles in a major production that they had here. Samantha Eggar went on to do the flop TV sitcom version of ANNA & THE KING and then became a trivia question.

For me, DOCTOR DOLITTLE was perhaps the first and last of the big, epic movies that came out in the sixties with overtures, intermissions and multi-hour running times that I would see. But I liked it.
Posted by Booksteve at 1:44 PM