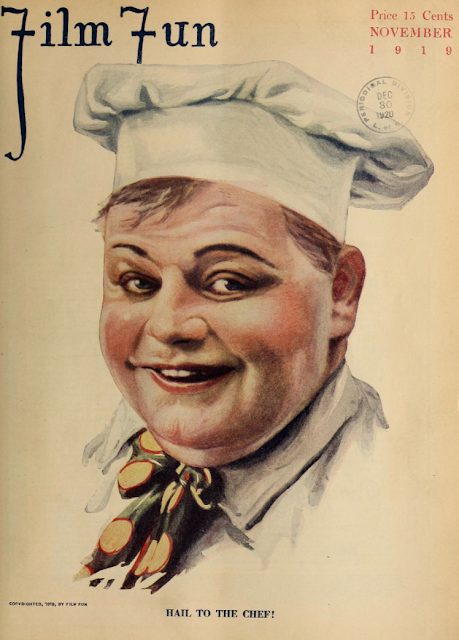 When I was four, one of my favorite TV shows was a local series that ran old silent comedies. They ran Chaplin and the Keystone Kops and, according to my Dad, Fatty Arbuckle. In retrospect, since Arbuckle's career had been destroyed by scandal in the early 1920's and his films outright banned for some years (in spite of the fact that he was never convicted of any wrong-doing and, in fact, history has offered much evidence of his total innocence), I'm wondering if perhaps it might have been Mack Swain or some other oversized performer that my father believed erroneously to be Arbuckle.

Nevertheless, since I was told it was Arbuckle, I became fascinated by his life and career and as an adult became all the more a fan...even if that WASN'T him I saw as a child.

At one time, Roscoe Arbuckle was arguably the number one comedian in American movies and certainly never fell below number two even after Chaplin's spectacular rise to fame (wearing Arbuckle's outsized pants). Arbuckle was quite athletic for a big man and his early films were frenetic. In time, often paired with Mack Sennett's favorite, Mabel Normand, he offered some more modern comedy but he was never afraid to look silly.

Arbuckle was the first person to put Buster Keaton in films in 1917 and the two remained friends until Roscoe's death. Keaton avoided any hint of scandal by his non-appearance (he was working I believe) at the now-notorious San Francisco party his friend threw in 1921 where a rather infamous young "starlet" died.

The reports of debauchery filled the press and quite frankly, wild parties were all the rage amongst the Hollywood elite in those days so the public ate it all up and believed every word. The once popular comedian's unreleased films remained so--at least in the US. He was banned from the screen just because! After a series of trials, he was never convicted. But he was also never forgiven. I guess it's hard to "forgive" someone when you can't figure out what they've done to need forgiveness.

Roscoe Arbuckle kept working for a while at least, moving behind the camera to the director's chair where he operated under assumed names like "William Goodrich." But he was no longer a happy man. The way the public turned against him had taken a toll and he died in 1923.

I doubt now that local TV was running Fatty Arbuckle pictures on TV even 40 years later. Maybe they were but I doubt it was him. But eventually I did discover his work and pronounced it good!

Posted by Booksteve at 2:02 PM