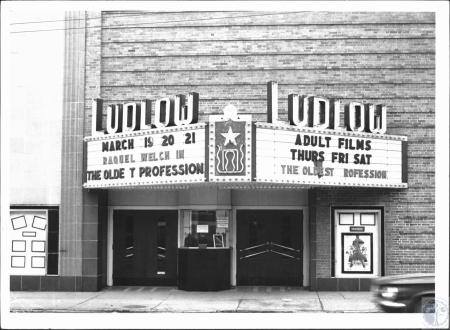 Here's the Ludlow Theatre where I often saw movies in the mid to late seventies. To get there, I had to take the # 3 bus from the Courthouse, one block from my house. It was about a half hour trip. Sometimes, I'd walk it, which took much longer but I enjoyed walking in those days. Normally, if I walked one direction, I'd take the bus back the other.

In the photo here what they're describing as an "Adult Film"was, in fact, Raquel Welch's THE OLDEST PROFESSION, a 1967 Italian sketch comedy film featuring cavemen and aliens.
Posted by Booksteve at 9:24 AM