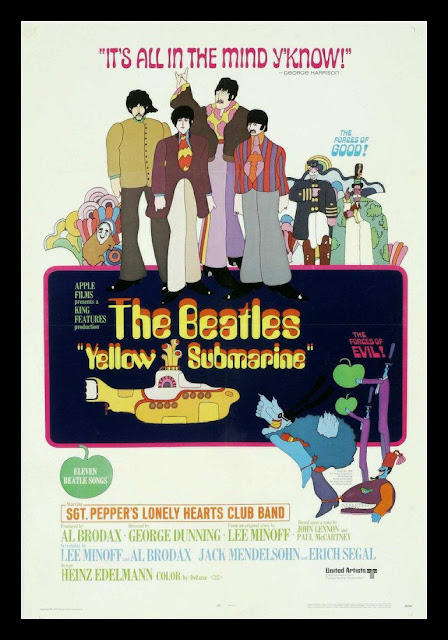 I'm somewhat ashamed to admit that in late 1968, I was NOT a Beatles fan. Well, let me clarify that. It wasn't that I didn't LIKE them...it's just that I paid little attention to them. I had yet to discover the joys of Top 40 radio and had had only limited exposure to the music of the Fabs as I was about to turn 10. I remember that by that point I knew and liked the songs "Paperback Writer," "Help" and "Run For Your Life."

What I WAS a fan of, though, were comic books and cartoons! Some time before the movie itself came out, Gold Key Comics came out with a truly psychedelic comic book adaptation drawn--as I was to find out many years later since it was unsigned--by Jose Delbo. I bought it at Woolworths and was mesmerized by the colorful magic of it all. The bright, shiny poster below folded out from the middle of the thick quarter comic and adorned my walls for ages. I still have it in fact but in a box.

I count YELLOW SUBMARINE as the first film I was ever allowed to see without adult supervision. There may have been a couple earlier but this was the first I remember. I went, as I often did in those days, with my friend Terry, to the Madison theater for a Saturday matinee.

As we rounded the corner by the Woolworths where I had earlier purchased the comic, we saw the line stretching more than halfway down the block! This was NOT a normal occurrence in those days (although we did see the exact same thing last year when Terry and I saw Kevin Smith live at the reopened Madison. Ah, nostalgia!)

This was what made me pay attention to the Beatles and, in fact, to the sixties in general. The film itself remains in my all-time Top Ten. It's a masterpiece of innovative art and animation, hilarious visual gags, puns and jokes, clever and original characters, all tied together by the spirit of the Beatles although others provided the voices. The music rises above all and fits so perfectly throughout with new songs mixing with old.

We left the theater singing "All Together Now," the one song that features the live action group at the end of the picture. On the way home we stopped at Woolworths and I bought the mass market paperback version of YELLOW SUBMARINE. Soon after, I got my first record player that played LP's and I traded many comics to Terry in exchange for his copy of the YS soundtrack album (which I finally had to sell just last year, darn it!). It was the first of many, many Beatles albums as they immediately became and stayed my favorite group. I even started dressing a little hipper and letting my hair grow just a bit over my ears!

In subsequent years, there were two fine books about the making of the film, a couple of lovely restored  video versions of the picture (with the missing "Hey Bulldog" sequence re-added) and talk of a truly pointless remake that seems to have now gone away. I have a full-size reproduction of the above poster and on Facebook I have a number of mutual friends with Jack Mendelsohn, the brilliant JACKY'S DIARY cartoonist who was one of the writers of YELLOW SUBMARINE.

YELLOW SUBMARINE. The first movie I ever saw without an adult. I may not have had to walk all that far to get there...but it sure was  aTRIP! 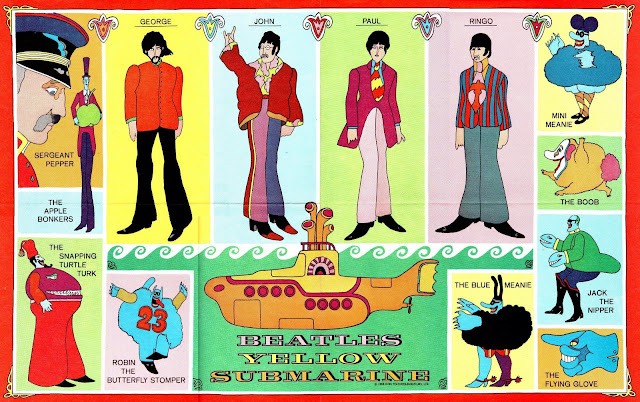 Posted by Booksteve at 9:12 PM