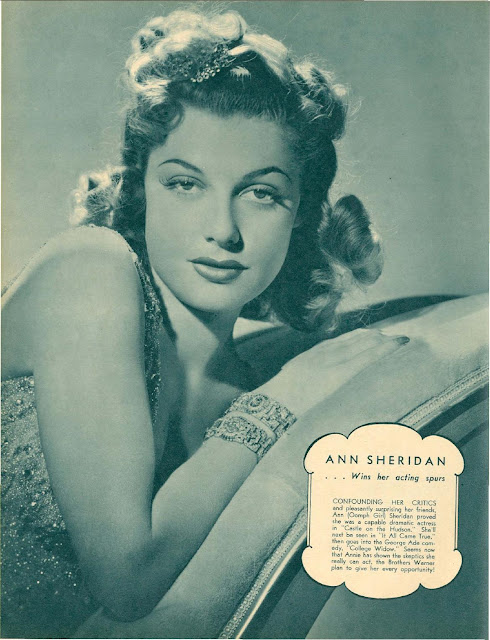 I first discovered sultry-eyed Ann Sheridan in her final performances as star of the 1966 TV western comedy, PISTOLS AND PETTICOATS. Although unknown to the producers, she was ill with cancer at the time and died before the season was over, effectively killing the popular program. I've watched  a number of episodes recently and it holds up quite well with Sheridan creating a deftly comic characterization even as her illness became visible.

It was probably a decade later, though, before I discovered her as the "Oomph" Girl of Hollywood's golden years. Beginning in the thirties, she was a welcome presence in tough Warner Brothers films like ANGELS WITH DIRTY FACES with the likes of Cagney and Bogart. My favorite roles of hers, however, were comedy turns with Cary Grant in I WAS A MALE WAR BRIDE in 1949 and with Jack Benny (with whom there was a rumored affair) in 1942's GEORGE WASHINGTON SLEPT HERE.
Posted by Booksteve at 10:41 PM