My First R-Rated Film: Twitch of the Death Nerve 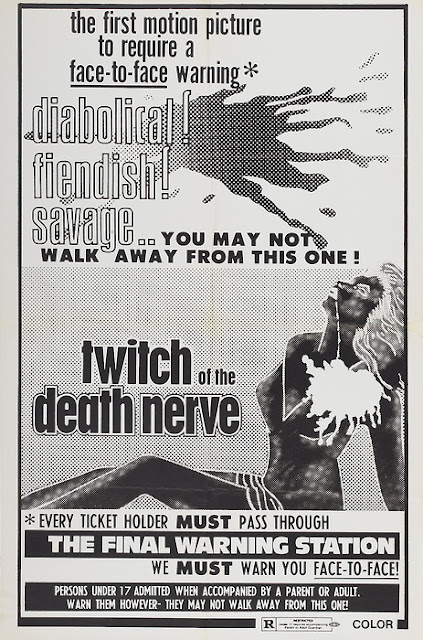 In 1973, I really wanted to see naked women. I was 14 so this was actually quite normal. I hadn't yet started buying adult mags but it did occur to me that R-rated motion pictures surely contained LOTS of boobs and butts and whatever else women might have that I hadn't yet discovered!  The problem was that R-rated films required adult accompaniment.

This it was that I managed to talk my mother into taking me to see my first R-Rated film--THE NIGHT EVELYN CAME OUT OF THE GRAVE! It was a 1971 Italian film but I didn't know that at the time. Since my parents knew I liked horror movies and this one was getting some TV ad play, I was able to get her to take me.

But it was a double feature and when we arrived the co-feature was just beginning so IT inadvertently became the first R-Rated film I ever saw.

That co-feature was TWITCH OF THE DEATH NERVE, one of the most controversial and violent films in the controversial and violent film career of the great Italian director Mario Bava. It wasn't my first Bava film as I'd seen several on TV, but certainly not as explicit as this one. It felt so weird sitting next to my mother whose mouth was hanging open in shock throughout.

Ultimately I didn't like it, a view I've since learned is shared by even many Bava fans. At this late date, having never seen it again, all I remember is a few topless scenes and lots of blood...and even then, it seems like most of the topless scenes were in THE NIGHT EVELYN CAME OUT OF THE GRAVE...which, miraculously, my mother still was able to sit through with me! Thanks, Mom!

Posted by Booksteve at 8:29 PM