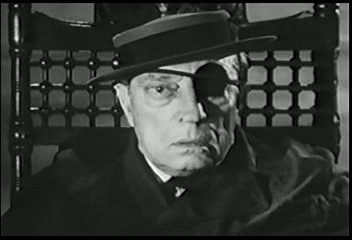 Back in the 1970's, I watched a PBS presentation of playwright Samuel Beckett's WAITING FOR GODOT and I was riveted. I know that many people truly hate this existentialist look at...well...nothing? Everything?

As I say, though, I was riveted. It made me think! I had not seen a lot of real plays even on television and this one simply entranced me. (Can't recall who starred in it at the moment though as I've seen several versions since.)

During that same period, I had developed a still-thriving obsession of all things Buster Keaton. Little by little I had managed to see all of his greatest 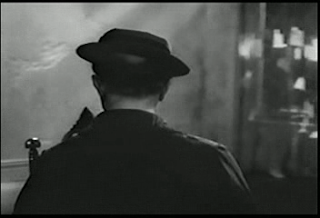 movies before 1980. Everything from a restored, tinted version of THE SAPHEAD to THE NAVIGATOR, THE GENERAL, SHERLOCK JR and even PAJAMA PARTY and A FUNNY THING HAPPENED ON THE WAY TO THE FORUM. Even THE RAILRODDER! What I never found...was FILM.

Samuel Beckett, according to at least one source, was a big Keaton fan also and, in fact, was reportedly inspired by Buster to write GODOT.

Thus, I suppose it was logical for the author to seek out his muse when making his first film. The film, FILM, is silent, only about 18 minutes long and is filled with jumpy cameras, nightmarish closeups, bizarre imagery and a graceful but ultimately disappointing non-perform 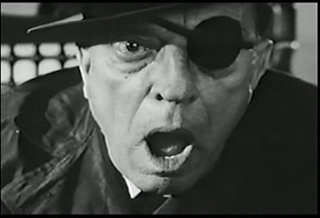 ance by Keaton (just prior to his death) as an old man who runs, goes into a building and sits in a chair. Only then does he face the camera and we see he has a patch on his eye.

Remember when I said that while I see the pretentiousness that others see in WAITING FOR GODOT, I still "got" it? Well, after nearly thirty years of waiting, I hate to say it but I do NOT get FILM. It seems not so much existential as surreal for the sake of being surreal in the way that Salvador Dali in his later years created garbage and TOLD his followers it was "deep." Hmmm...I could name a few comic book artists that do that, too. Elitest claptrap, anyone? All in all, I have to say I'm glad to finally cross off yet another of my long-time must-see pictures but when it comes to later Keaton, I still prefer HOW TO STUFF A WILD BIKINI!
Posted by Booksteve at 11:14 AM