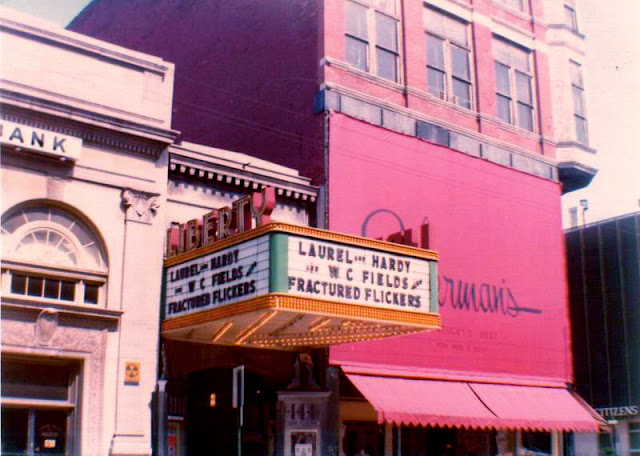 The Liberty Theater in downtown Covington was my favorite theater growing up. The seats were uncomfortable but it was a gorgeous, old-style theater with statues and a fancy staircase up to the balcony, a lovely red carpet and a long hallway filled with posters and lobby cards of upcoming releases between the box office and the actual theater.

The website Cinema Treasures writes: The Liberty Theater featured 1,500 blue leather seats on the main floor and the balcony. Other amenities included an Italian marble lobby complete with a miniature Statue of Liberty, mahogany ticket sales booths, a grand marble and brass stairway, a large organ and a large mural of New York harbor painted on the stage.

When the Liberty closed, either in 1970 or '71 as I recall, this was their final show. All seats were a dime  for that last week's program and popcorn was free. The bill was a long one consisting of one of the Robert Youngson feature-length compilations of comedy clips (not sure which one), Youngson's FURTHER PERILS OF LAUREL AND HARDY, W.C. Fields in THE FATAL GLASS OF BEER, an episode of Jay Ward's FRACTURED FLICKERS ("Dinky Dunston" the irreverent sendup of Chaney's silent classic, THE HUNCHBACK OF NOTRE DAME), and a whole passel of Ward and Total Television TV cartoons (a treat on the big screen!) including BULLWINKLE, GEORGE OF THE JUNGLE, TENNESSEE TUXEDO and UNDERDOG!

Posted in a shorter form at BOOKSTEVE'S LIBRARY in January, 2013

Posted by Booksteve at 8:59 AM