Radar Men From the Serials 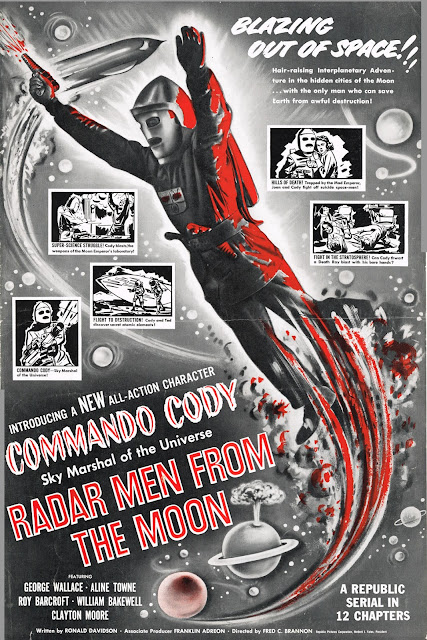 I had heard about movie serials by the early seventies. In fact, I believe I already had the great picture history of talking serials, TO BE CONTINUED. Come to think of it, I first heard about serials in the 1966 ON THE SCENE SUPER HEROES magazine from Warren publishing. I had never seen one in its entirety though. Then one Saturday afternoon, WCET, the NET/PBS station in Cincinnati, ran a marathon of every episode of RADAR MEN FROM THE MOON!

Previously Channel 19, WXIX,  had run weekly FLASH GORDON episodes late on Saturday nights but I hadn't caught them all. This was the first time I would see an entire serial. The first thing I realized was that they really get repetitive and downright annoyingly dull if one watches them straight through rather than the way they were meant to be seen!

Still, this was my real introduction to this unique type of episodic filmmaking and I've been a fan ever since. With the advent of video and later the Internet, I've been able to see nearly all the serials I used to drool over in TO BE CONTINUED. We'll cover some as we go along.
Posted by Booksteve at 6:01 PM