Back in 1973, my friend Terry and I were big PLANET OF THE APES fans. We were also big Hammer Films fans. We were also pubescent males. Thus it was imperative that we talk either HIS parents of MY parents into taking us to the drive-in to see this particular double feature. In this case, his mother ended up taking us.

BATTLE FOR THE PLANET OF THE APES, like any film that's fifth in a series, tried too hard. The  previous picture, CONQUEST, managed to bring the series to what seemed to be a full circle in which the impetus for the Simian takeover of Earth came from the son of the two future apes who had come from the Earth after the apes had taken over. It was a more-or-less neat tie-up to a well-done film series.

BUT...there was still money to be made so another one was quickly thrown into the pipeline. Same director--J. Lee Thompson, perhaps best known for the mega-hit GUNS OF NAVARONE but later reduced to DEATH WISH 4. Same star--Roddy McDowall, the eternal likable juvenile who finally found a niche as an adult star some three decades past his initial above the title roles. McDowall came to my attention via the Apes pictures and ended up becoming one of my all-time favorite performers.

For this one, they tried to move forward a few years from the previous film's end but it's all just a convoluted mess...told in flashback, yet! Every ape seems to be a familiar name but very few of them seem to have the full makeup treatment that made the series so popular in the first place. And the obvious masks detract quite a bit from one's suspension of disbelief. The great Severn Darden, a veteran of Second City, plays the mutant leader. After this, the franchise moved to television, comics and cartoons before the reboots of decades later. 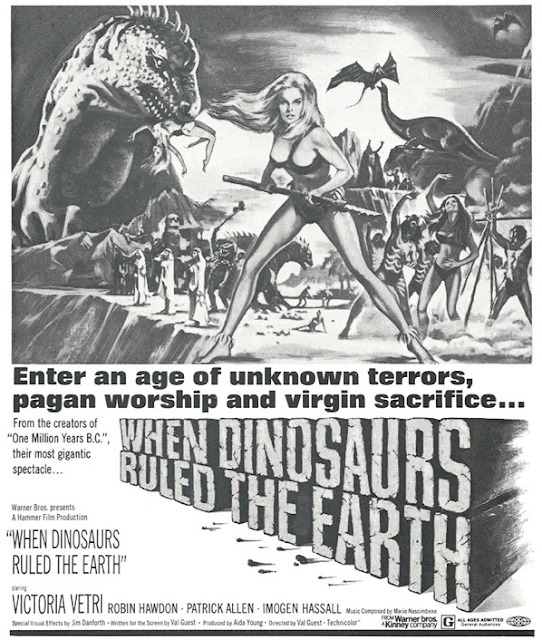 We were both disappointed...but we stayed to see Hammer's 1970 WHEN DINOSAURS RULED THE EARTH. It wasn't our beloved Ray Harryhausen but it did have dinosaurs and spfx by Jim Danforth and David Allen, both of whom we knew from FAMOUS MONSTERS magazine. More importantly it had half-naked stone age ladies! At the time, we had no idea that this G-rated flick would have been rated R if, in fact, the US distributors had left in the nude scenes and sex scenes! We would later see stills in a book on Hammer. HOTCHA! That night though, it was enough to equate gorgeous star Victoria Vetri with our favorite sex symbol, Raquel Welch, herself a former cave girl. In recent years, Ms. Vetri, aka former PLAYBOY centerfold Angela Dorian aka Victoria Rathgeb was tried and convicted of attempted involuntary manslaughter and at last report was serving time in prison.

Posted by Booksteve at 6:52 PM