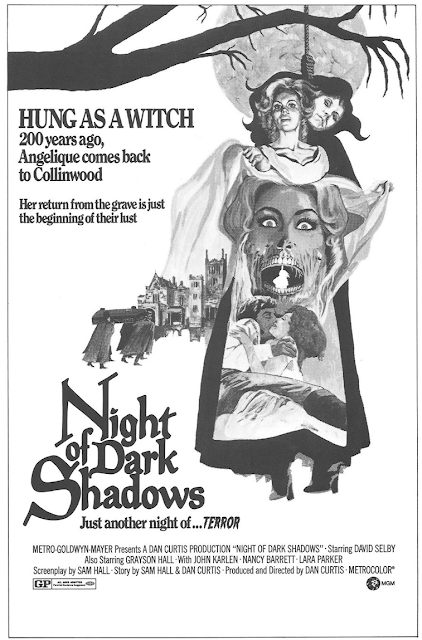 I was a huge DARK SHADOWS fan when HOUSE OF DARK SHADOWS came out. It only played locally at drive-ins so I had to talk my Dad into taking me to see it at the Dixie Gardens drive-in. By the time this vampireless follow-up arrived in theaters, the show was waning in popularity on TV and also at my house. In fact, DS may have already been off the air by the time NIGHT OF DARK SHADOWS was released.

NIGHT OF DARK SHADOWS became one of the first films whose ads I clipped for what would ultimately become a 28 scrapbook collection of movie ads. I didn't start the scrapbooks until 1973 so I kept the few ads I had clipped out earlier in a box under the living room couch.

While a few of the actors from the previous film carried over (as different characters), this picture had no real ties to the series continuity or the other film. David Selby who had joined Jonathan Frid as a gothic hero/villain heartthrob took the lead alongside newcomer Kate Jackson who had barely appeared on the show at all and even then a mute ghost. Lara Parker's sexy witch, Angelique, was the only real carryover in this one.

In fact, that sexiness was emphasized in these ads with their tagline, "Her return from the grave is just the beginning of their lust." Note that I added a period. The ads don't have one in spite of the fact that it's a full sentence. I remember distinctly thinking, at age 12, that this ad needed a period! In fact, I also distinctly recall that this was the first time I had ever encountered the word "lust." 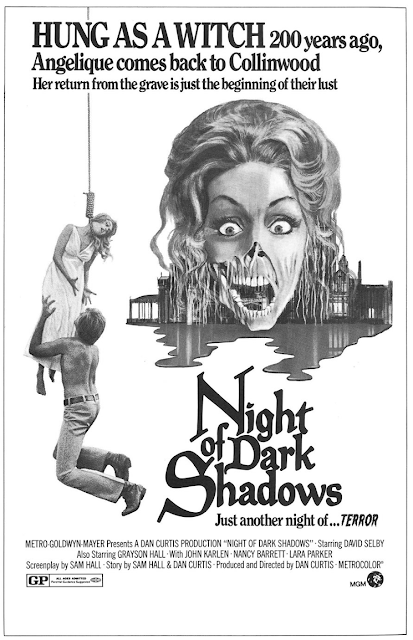 The story of possessions and murders and a little witchcraft is pretty dull compared to some of the things the TV show came up with and when I finally saw it more than a decade later on ON-TV, I was disappointed. I would revisit it again later, however, upon learning its odd connection to murdered starlet Christa Helm. See my GOING FOR BROKE blog for more details on that part of the story.