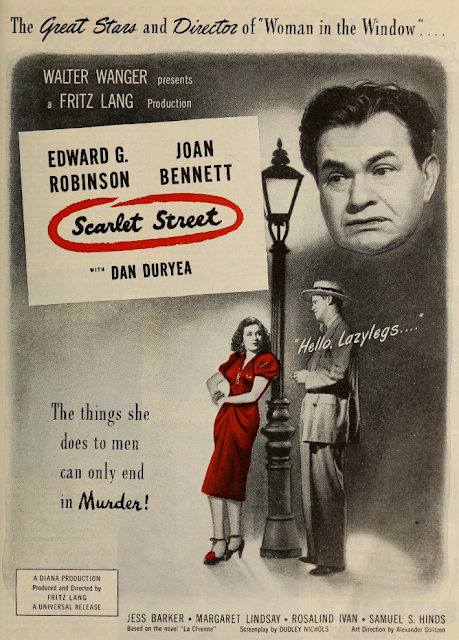 Edward G. Robinson and Dan Duryea were two of my Dad's favorite actors. As he grew older, he even became a bit of a lookalike of Robinson to the point where a woman on a bus once actually thought he WAS him!

Growing up in the sixties and seventies, I knew Edward G as the bearded old guy on various movies and TV shows including a memorable episode of NIGHT GALLERY, THE CINCINNATI KID, THE OLD MAN WHO CRIED WOLF and, of course, SOYLENT GREEN.

But by the eighties I had never seen prime Robinson. And Duryea I only knew from an early TWILIGHT ZONE. Then one local station picked up a package with lots of Robinson pictures, the first of which I saw was Fritz Lang's 1945 masterpiece, SCARLET STREET.

SCARLET STREET was not my first film noir (that was THE DARK CORNER with Lucille Ball) but it was a bit of a revelation as to how adult movies could get back in the old days when they really wanted to!

The plot features married, middle-aged, mid-life crisis painter Robinson rescuing and falling for a young woman of the streets played by later DARK SHADOWS matriarch Joan Bennett. His efforts to impress her lead to her "boyfriend" Duryea cutting in on what looks to be a cushy deal...at first.

Great directing and photography, brilliant, adult acting and brilliant performances. Many years later they'd even name a magazine after this movie.
Posted by Booksteve at 9:39 AM