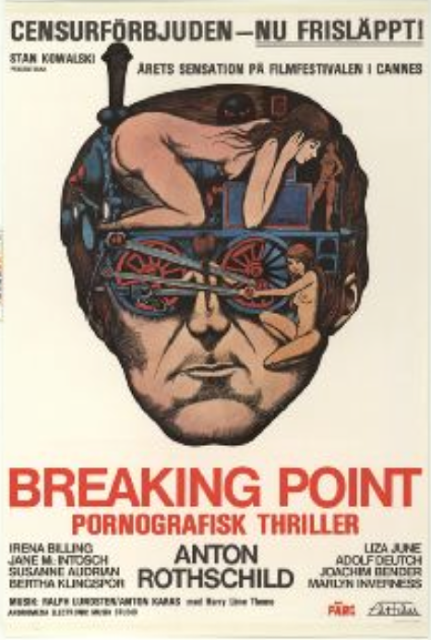 When I was  teenager, there was a lot of talk about the new explicitness in films and how the next logical step would be actual mainstream films for adults featuring real actors in hardcore sex scenes integral to the plot. (This, of course, is quite the opposite of the typical seventies porn film which had a plot that was integral to the sex scenes!) Meanwhile, when I was 16, they were already doing that sort of thing in Sweden even though it never caught on here. BREAKING POINT is a well-done, in fact rather artsy at times, thriller with good performances, exciting scenes and a surprising ending. The plot deals with our meek, mild-mannered hero who just MIGHT be the serial rapist everyone is talking about on the radio or who MIGHT be simply taking advantage of the fact that authorities were instructing women not to fight the man off if it might endanger them. Or it MIGHT be that all of his adventures, sexual and otherwise, are all, as the poster implies, in his head. There's some genuine tension and an exciting scene with bank robbers as well. The XXX scenes take up so little of the running time that this could hardly be called a sex film and yet they really are integral to the plot. Obviously not a film for everyone but well worth catching if one isn't offended by this type of thing. Interesting to imagine if it HAD caught on the US.

Posted by Booksteve at 6:59 PM