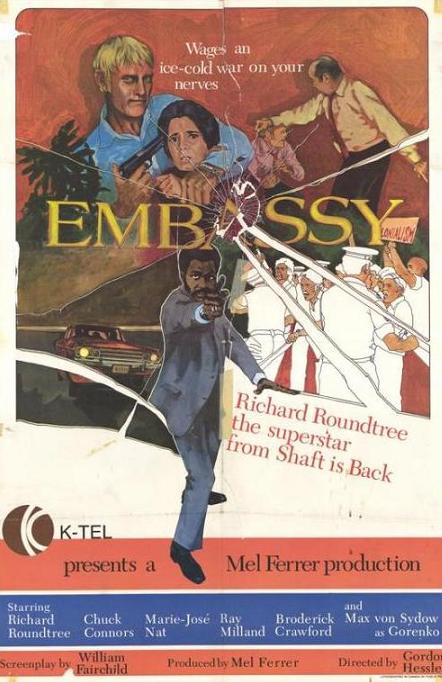 This one would have been a good one for my BOOKSTEVE'S LIBRARY series, "Movies That Fell Through the Cracks." I had never heard of it until a couple of weeks ago. Admit it. You hadn't heard of it until just now!

If mentioned at all, it's usually described as a blaxploitation movie...which it isn't. In fact, star Richard (SHAFT) Roundtree is nearly the only person of color in the whole picture. EMBASSY plays more like an unsold TV pilot, actually. But for a few PG words throughout, I'd swear that's what it is. Roundtree is an assistant to the US Ambassador to Beirut, played by veteran Ray (THE LOST WEEKEND) Milland. We see the everyday operations of their embassy in Lebanon on the day when Russian Max (THE EXORCIST) Von Sydow decides to defect. Broderick (HIGHWAY PATROL) Crawford is the embassy's head of security. Then Chuck (RIFLEMAN) Conners arrives, looking much like his character from that same year's SOYLENT GREEN, trying to assassinate Von Sydow.

This was apparently Roundtree's second film (not counting his appearance in Alan Funt's WHAT DO YOU SAY TO A NAKED LADY?) and his immediate follow-up to the game-changing SHAFT. For a former male model, he is honestly quite good here, although much more mainstream and without that feral charm he exhibited as "the sex machine with all the chicks."

EMBASSY was distributed by the notorious "K-Tel" for some reason. It was produced by Audrey Hepburn's ex-husband, Director/actor Mel Ferrer and helmed by veteran director Gordon Hessler whose vast TV experience may be the reason this looks like aTV movie.