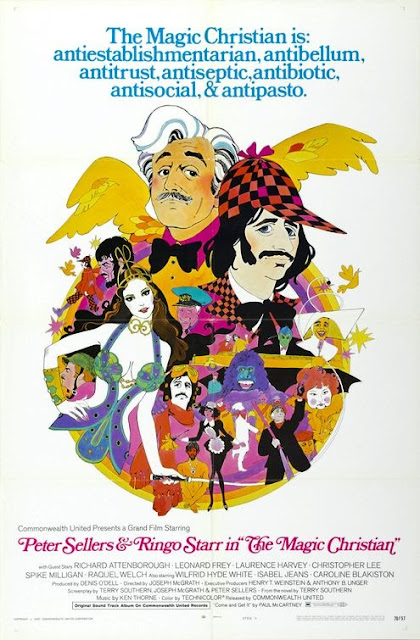 I have a real love/hate relationship with THE MAGIC CHRISTIAN. On the one hand, I'm convinced it may well be the single worst movie of the sixties. On the other hand, I keep going back to it. 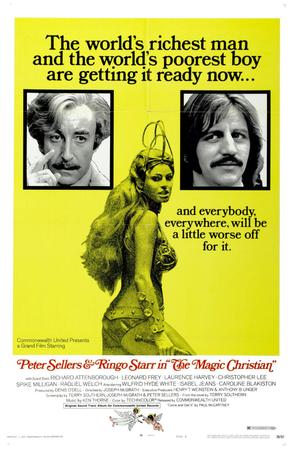 I first heard of it through its omnipresent marketing campaign at the time of its initial release. I was 10 years old, though, and had no interest jun seeing it. It got a lot of publicity as the first non-Beatle role for Ringo Starr, long-touted as the "New Chaplin" after his work in A HARD DAY'S NIGHT. 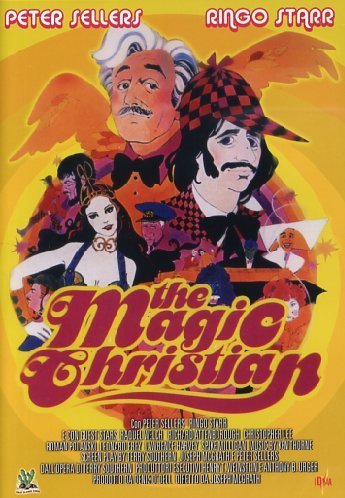 After spotting a pic of a bizarrely costumed Raquel Welch with Ringo in a magazine a year or so later, though, I revised my opinion. 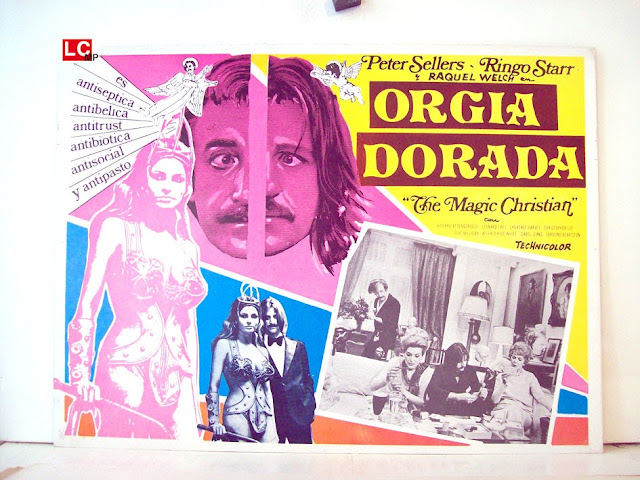 I picked up the soundtrack LP at Woolworths just to get the cool pic of Raquel in that same outfit that was on the back cover only to find out I liked the music. Along with Thunderclap Newman's "Something In the Air," I also discovered Badfinger! And I loved what I heard! Some of the comedy bits on the album made it sound funny, too. 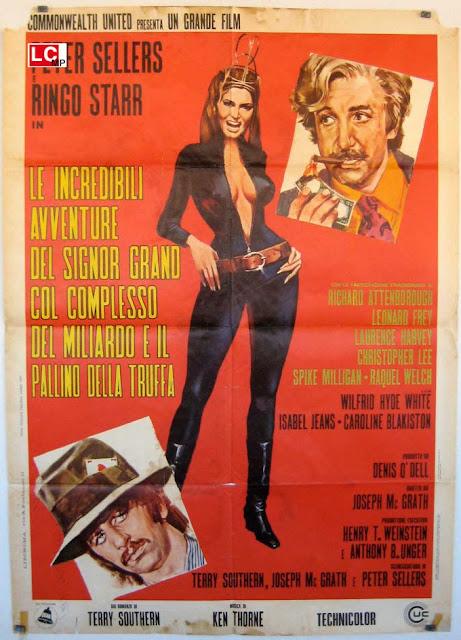 When I found out that Christopher Lee was in it--and didn't yet know that he appeared for less than a minute--I decided I did want to see it…only it was now long gone from theaters. 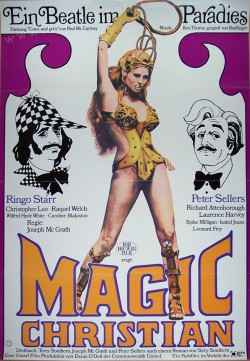 I caught a highly edited version on local TV in the late seventies, about a decade after it came out. It was stupid, disjointed and made no sense whatsoever. I chalked that up to the cuts. I was wrong. 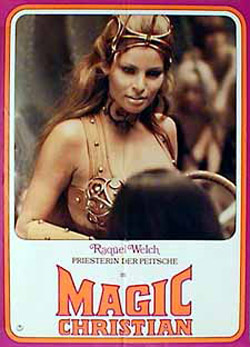 Finally catching an uncut version in the early eighties as the age of video dawned, I was shocked to see that it was even more tasteless and unfunny and disjointed than the edited version had been! I bought the paperback book in hopes of making some sense out of it, not realizing that author Terry Southern wrote under the influence of many bizarre things. The book makes even less sense and, in fact, doesn't even contain Ringo's character at all. He was created just to shoehorn the Beatle into the flick! This explains why Ringo has virtually nothing to do or say in the picture as he walks through the role, destroying all of his early cinematic promise. 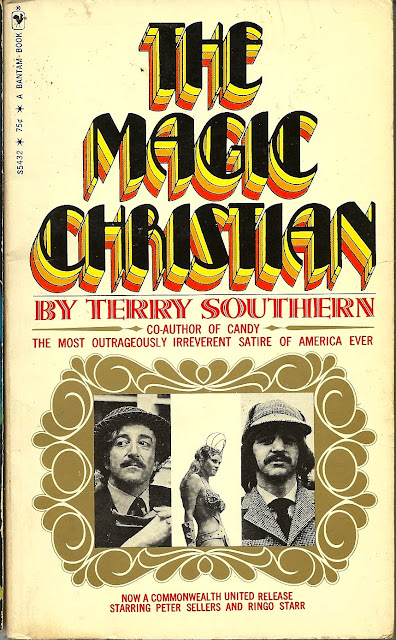 Graham Chapman and John Cleese worked on the screenplay--two of the funniest men who ever lived in my opinion. They also appear in small roles, neither yet having achieved real stardom. 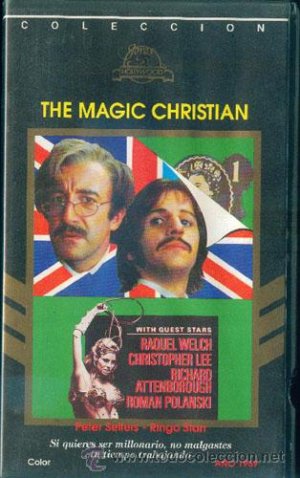 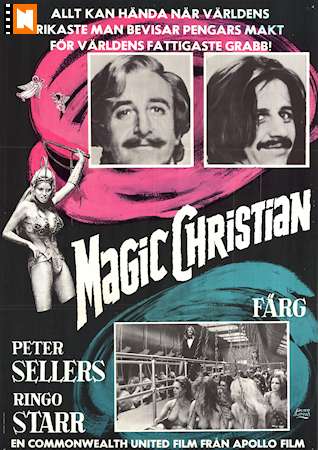 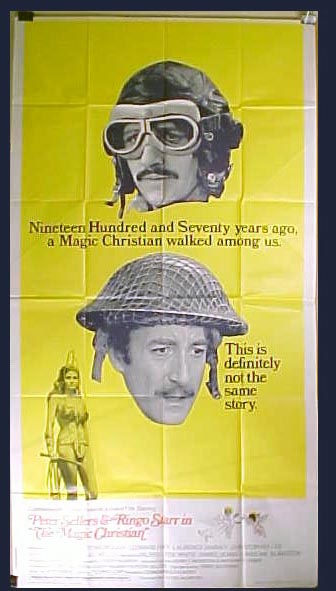 In time, I became quite the fan of Peter Sellers. Even his worst choices for film vehicles provided some interest due to his prodigious talents. 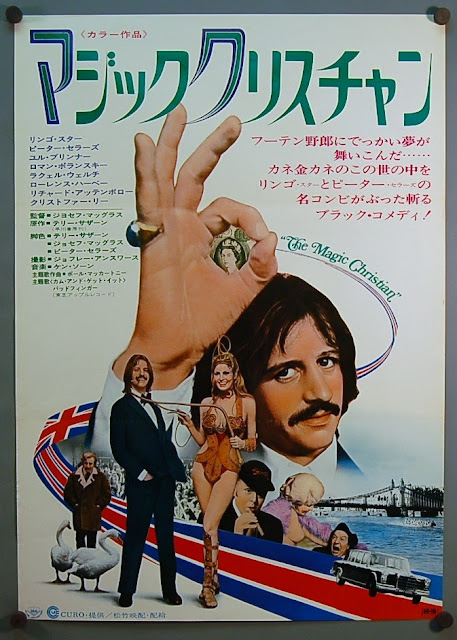 The plot, by the way, is nothing more than a long series of unfunny or only mildly amusing vignettes in which the world's richest man sets out to prove to no one in particular that everyone has his price and will do the most outlandish and disgusting things for money. 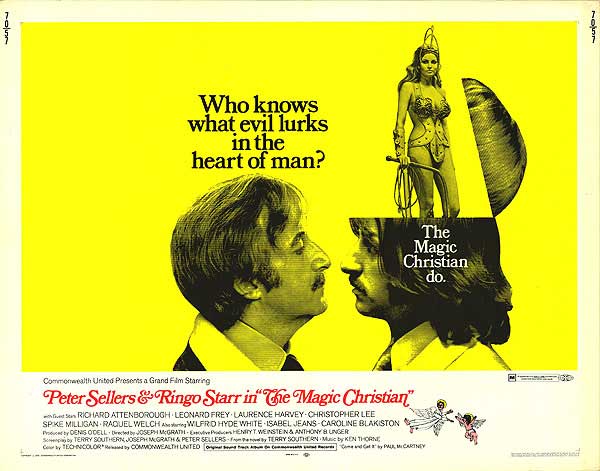 In 2007, a co-worker, knowing that I liked Sellers and the Beatles, made me a present of a DVD of THE MAGIC CHRISTIAN. It's colorful, musical and has many familiar faces but I'm still not at all sure it isn't the worst film of the sixties.

Sellers' career would fall a bit more before his mid-seventies comeback in THE RETURN OF THE PINK PANTHER. Ringo's acting career would never really recover. 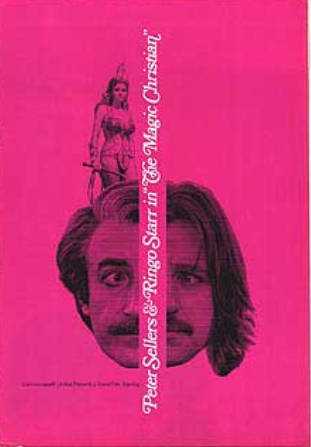 Over the years, the film is mainly--and justly--remembered for its Badfinger songs including the McCartney-penned masterpiece that is COME AND GET IT. 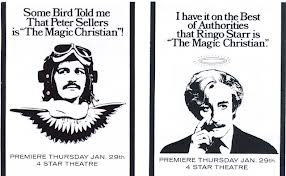