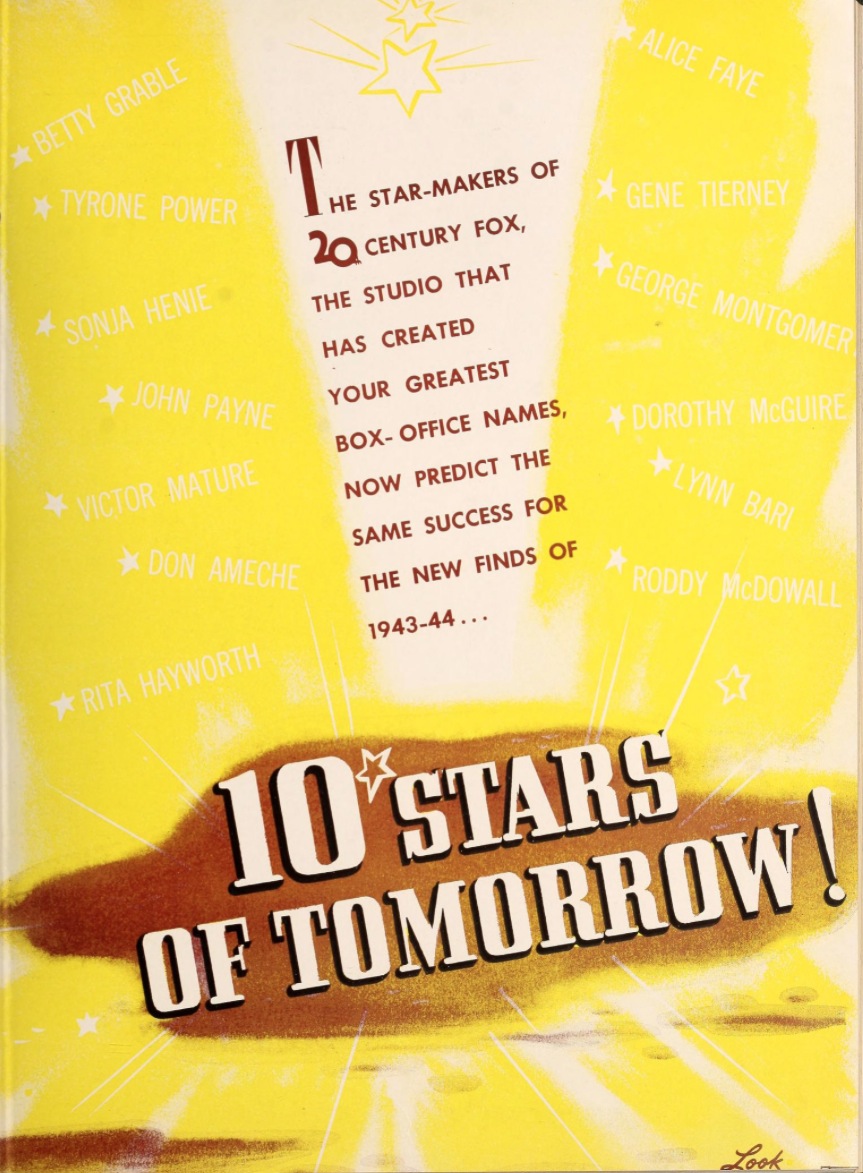 In late 1943, this 4 page paid ad in MOTION PICTURE DAILY claimed these 10 Fox stars to be people to watch going into 1944. Was it just studio hype or were they correct? How right were they? Let's take a look, shall we? 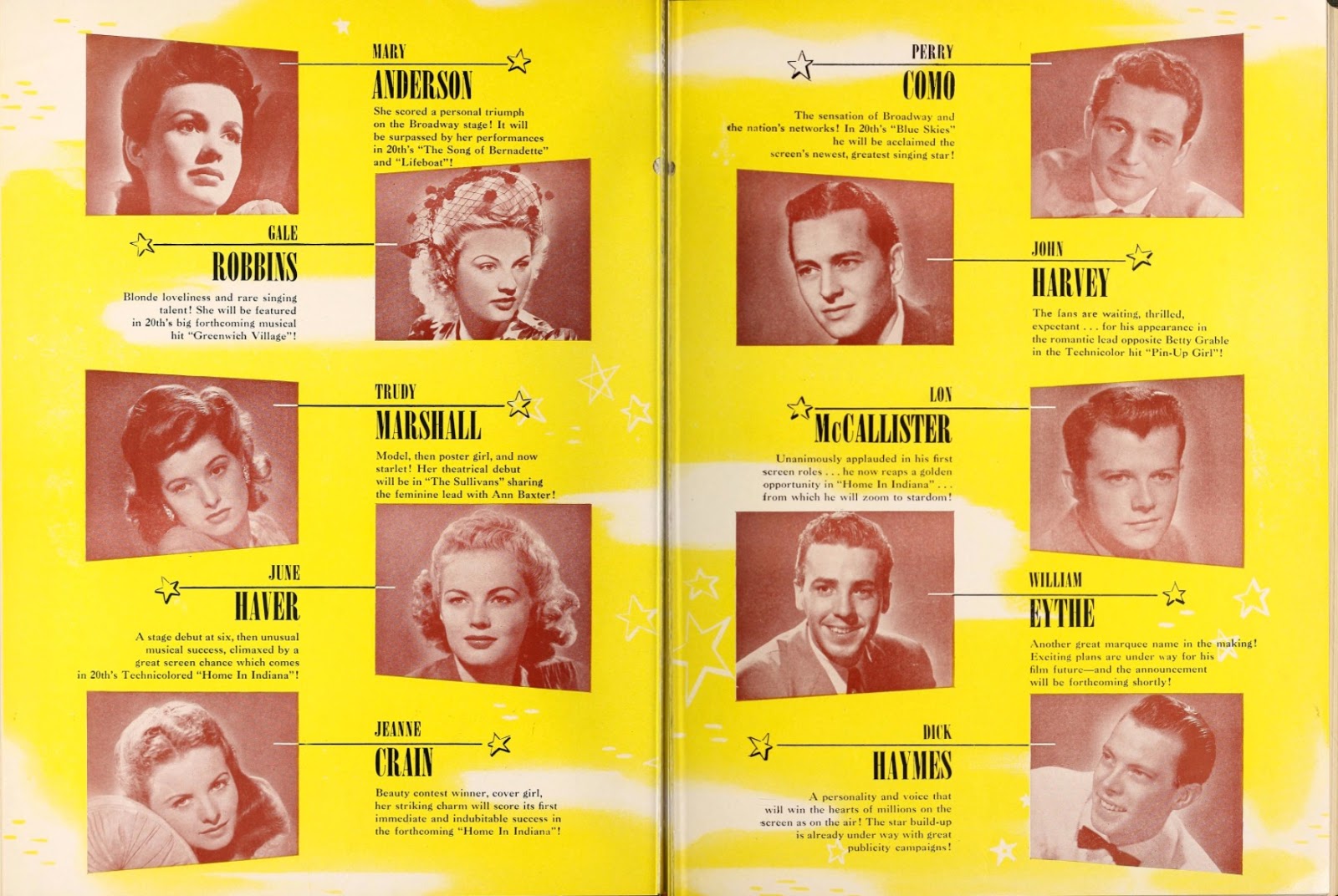 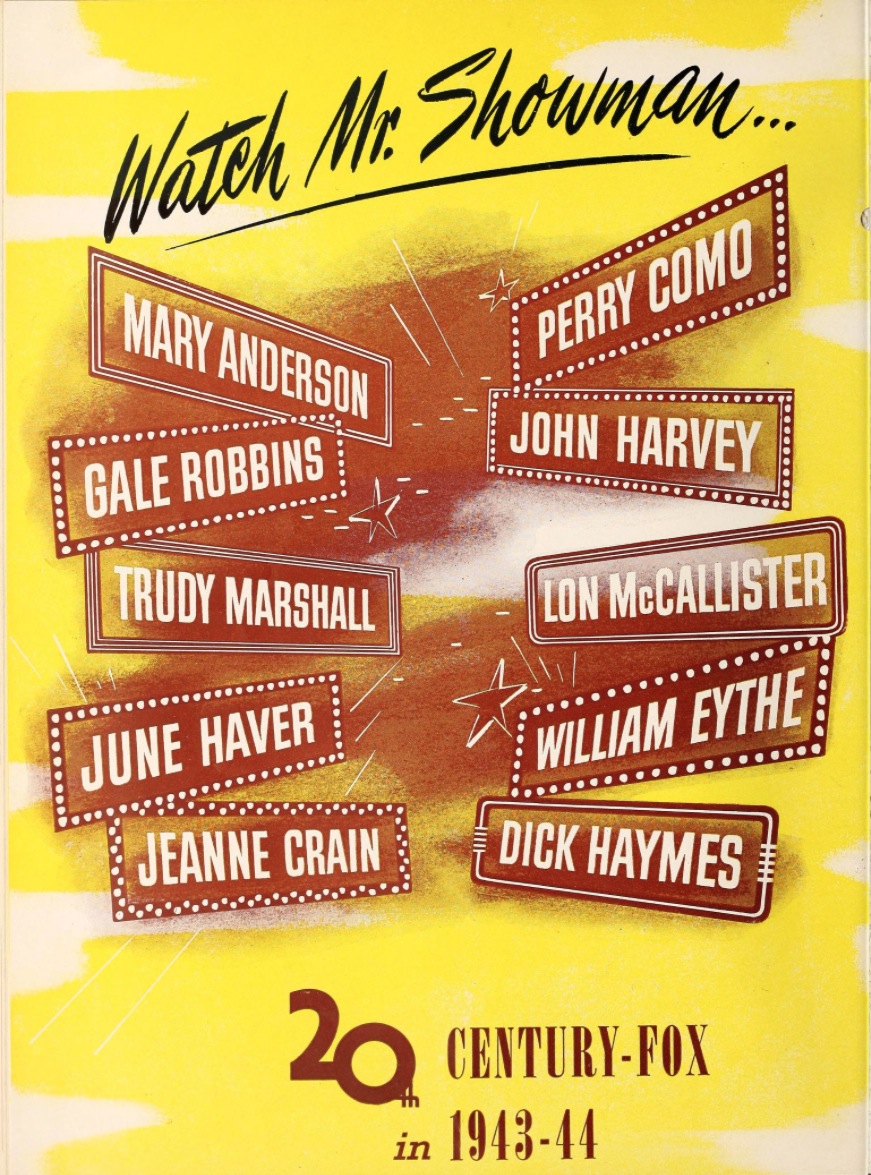 Starting at the top in GONE WITH THE WIND, she was doing well up through the two roles cited here in the ad but afterwards, her roles became smaller and smaller. She ended her career doing TV guest spots into the early 1960s and passed away just this year at the age of 96. For some undoubtedly fascinating reason, IMDB has her last role uncredited in CHEECH & CHONG'S NEXT MOVIE, from 1980.

She was a new sign-up for 20th at the time and became a fairly well-known pin-up girl, even touring with Bob Hope. On screen, she maintained a mid-level presence in her films and later, like Mary, wandered into a career of character parts on TV. She gave up acting to raise a family but returned some years later after her husband was killed in an accident. She worked in nightclubs, had a brief role in 1972's feminist comedy, STAND UP AND BE COUNTED, and appeared onstage in COMPANY. She died in 1980.

This former model went from a handful of uncredited bits straight to the female lead in a Laurel and Hardy feature. Unfortunately, it was one of their worst. Still, she took the lead in LADIES OF WASHINGTON, now long forgotten. After that, her career was said to have been sabotaged by the studio when she married someone they didn't approve. That marriage gave us future actress Deborah Raffin, however, who--among her notable accomplishments--pioneered Books on Tape! Trudy worked sporadically in films and TV up through the late 70s and died in 2004.

Starting out as a child in Cincinnati and later known as "The Pocket Grable," June did pretty well in her early films but left the business when her fiancé died. She went into a convent with the express idea of becoming a nun. Instead, she left it and married actor Fred MacMurray, to whom she had been introduced by John Wayne. She died in 2004.

This one they got right. Starting small, she worked her way up and, in spite of having 7 children along the way, pretty much stayed there through dozens of vehicles, ending her career after 1972's SKYJACKED. She died in 2003.

Depends on your point of view. As a film star, the laconic former barber was a bust but as a recording artist, he became "Sinatra Lite" continuing to have Top Ten hits for the the next 3 decades, many successful television specials and  was memorably spoofed in the 80s on SCTV. He passed in 2001.

This guy simply didn't LIKE making movies and asked to be released from his contract after only a few. He returned to the stage and started a talent agency before he died in 1970.

Already appearing in bit parts for a decade, his career was hampered by the fact that his height and his looks wouldn't get him anything beyond juvenile roles so he more or less retired at the age of 30. There were a couple of TV guest spots a decade later but then he went into real estate until he died in 2005.

In spite of a few meaty roles, he simply didn't get that good of reviews from the public or the critics and his career petered out after a decade. Depression and alcohol kept him in the headlines until his early death in 1957.

A hugely successful singer in his day, Haymes film career seemed to lead him to nothing but trouble as he married 5 times and developed a major drinking problem as his career crashed around him. He pulled it together long enough for a minor revival of his singing career and even appeared rather often in character parts on TV series in the late 1970s before his death in 1980.

Posted by Booksteve at 5:37 PM